Just a wee series of Google+ bugs i’ve noticed while playing around with the platform. Probably not going to update it again, and the series will end up being one post, but who cares.

Anyway, I do think that Google+ is a neat social platform, alot of potential, and I like the approach to friend categorization. But if you had the chance to play around with it, then you know its clearly a beta release, not just in terms of bugs, but also in terms of features.

Its also very interesting how Google Plus tries to combine concepts from both Facebook and Twitter (in some respect), effectively trying to show users that they don’t need two social platforms, when you can have one hub that does everything.

Anyway this isn’t really a review of Google Plus, there is plenty of them out there.

Google Plus Bug #1
Its not really a bug, but more like synchronization issue between different components.

Basically, if one updates their profile picture, this change is not being propagated to different components effectively, for example the comment section.

Here is an image to demonstrate this bug. 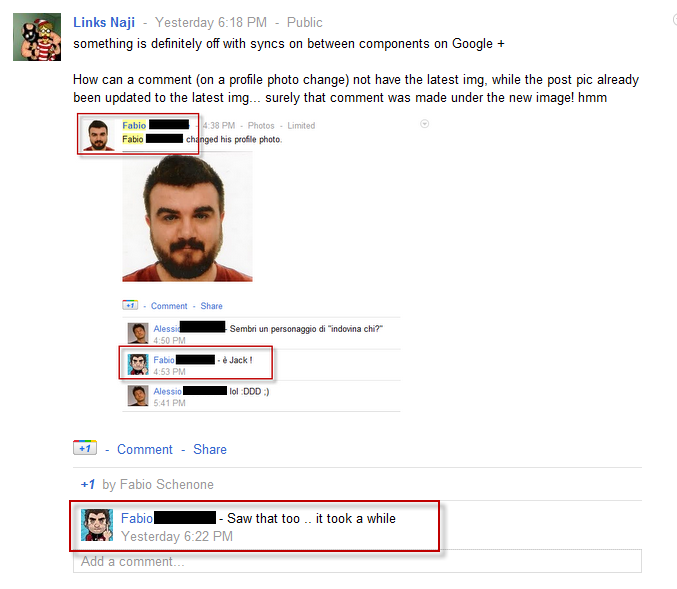 The image can be abit confusing, I actually posted the bug on Google Plus originally, which made my friend Fabio (who is the one that changes his profile picture), to comment on my post an hour or so later, which again shows the synchronization issue, as even after the second comment, his profile picture still remains the old one.

Anyway its pretty interesting, I wonder what is actually happening in the background, as in, why the update is not going through as fast as it should.

1 Comment/
Array Likes
/1 Tweets/posted in Google Plus
← SSRS SSL Certificate Nightmare
Google Plus Bugs – #2: You Are Your Own Friend! →
1 reply