Currently SQL Server ships with 2 SSRS reports that displays some information about job run time and status, these reports can be reached via SSMS or Data Tools by pressing Right-Click on the SQL Server Agent node in Object Explorer and then clicking on Reports, were you will see two reports under Standard Reports: 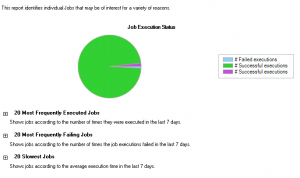 There is also the Job Activity Monitor Form: This is generally what most people use to monitor the activity on their SQL Server Agent instance, such as job failure, historical execution time, and many other textual data.

These reports are basic and provides a nice way to start investigating performance and execution problems within your Job Agent, but they are oriented around jobs, duration and execution statuses, rather than the visualization of temporal data in a way that we can detect jobs that are overlapping, the ones that are conflicting with each other, and generally the distribution of jobs over time to help you detect any periods of low activity and high activity on your Job Agent instance.

For that reason I created the SQL Job Agent Schedule Timeline SSRS report. This report (pictured at the top of the article) is essentially a Range Bar SSRS Chart that displays Time on its x-axis and jobs on the y-axis, ordered by the time when the execution started, the report takes the following parameters:

The SSRS report uses Job Agent System Tables to grab historical job run information, the query for which is embedded within the report itself (so no need to create a stored procedure on the server). The report is setup to run with the security context of the current Windows user, which needs to have rights to read from the Job Agent System Tables in msdb. Only jobs that took longer than 5 minutes to execute are displayed (limited by the query in the RDL), I only added that because otherwise the graph becomes very messy on my servers, this restriction can be removed by editing the query.

The report will display a job’s timeline in a blue bar if the job did not report a status 0 (or failure), and a red bar will be shown if the status is 0.

Although it is not really very much, it gives a very nice overview of how jobs are running on the current server, and helps you detect in a very visual way any issues that might rise due to schedule conflicts, high concentration of jobs at specific times of day, and time opportunities of low activities to move jobs into for a less resource intensive schedule.