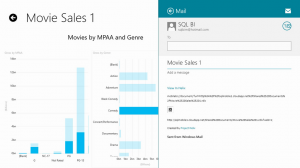 There is an awesome post by Graham L on Project Helix, probably the most comprehensive article I’ve seen online yet given the news has just broken out.

This mobile BI platform project (Helix) is considered as Phase 3 of Microsoft’s effort towards building a Mobile BI solution, the idea for Phase 1 and 2 is to allow the current reporting and BI infrastructure that is delivered through SSRS to be accessible, navigable and can be interacted with using a mobile device. In Phase 3 Microsoft announced that they will be developing a fully-fledged mobile BI platform that is based on the Windows 8 Wave experience, which is now seeing dominance across different Microsoft services (such as Azure) and devices (such as Xbox).

Although I have not yet trialled or been shown this system live, it feels like it is based on the Silverlight interface we got used to with Power View, which is interesting given the support of Silverlight on non-Microsoft mobile devices is low to non-existent. I personally would’ve betted on something a bit more portable like HTML5.

In any case this is very exciting, and Microsoft keeping quiet about this (and releasing it in the SharePoint conference rather than PASS) is also very interesting and raises many questions.