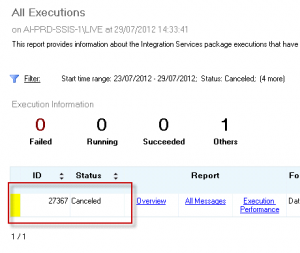 If you have used Microsoft development products long enough, then you must be familiar with the error reporting nightmares some of their products exhibit, the classic “please check the error log for more details” message, even though you are in the error log, is not just frustrating, but in my opinion is a bug that shouldn’t even reach end consumer, especially when you are handing the developers a framework for them to build on and extend.

Microsoft’s SSIS and SSRS have always been shortchanged when it comes to error logging; whether they are run-time errors on the server, or even while trying to debug a package or a report in a development environment, there is no lack of confusing error messages that send you down hours of so many long winded paths that leaves you tugging on strings hoping something might eventually make sense.

Today I will go through one of SSIS 2012 new quirks, the SSIS Canceled Status (or error), and what could be the reasons that you might receive such an error.

I have dealt with SSIS 2005 and 2008 for years now, and started to get a really good handle on what an error is trying to say, rather than what it is saying. To an outsider it might look like some Jedi mind tricks, or that perhaps I am using some sort of telepathy SSIS component, but in reality I just spend shit loads of time decoding the hidden meaning behind a ridiculous error message trying to find the actual root cause of a box turning red instead of green.

But SSIS 2012 is a new beast, and with that comes a host of new and exciting quirks and awesomely encrypted error messages that is surely bound to turn hairs white and hearts into stones. The SSIS 2012 Canceled Status (which could be seen in a Package’s Execution Messages report), is a reliable start into this hideous world of SSIS darkness and disrepair… I might be being abit over-dramatic here.

What is an SSIS Canceled Status?

The Canceled status in SSIS 2012 is an indication that the package has stopped execution, this stoppage is due to either a user or a system(such as SQL Server) forcing the termination of the SSIS package before it finished executing.

The thing to focus on here is that a package could be Canceled either by a user or by a system, the Canceled status does not distinguish between either, and does not log any error message indicating the cause of the cancellation, leaving the user to investigate why a cancellation of execution happened on their merry own.

This is bad, especially when there are many cooks managing different SSIS packages, being able to tell why a package has been Canceled, and whether this has been done by a user or due to a system or environmental error is of paramount importance.

It is important to note that SSIS Execution Statuses are statuses about the execution of the steps within an SSIS packages, and not the execution status of an SSIS package within an environment, in fact, a package execution context has no idea about the environment it is executing under, and if anything environmental (such as resource contention on the box, or Deadlocks in the SSIS Catalog DB) causes SSIS execution to be interrupted, SSIS’s Execution Status will be set Canceled, rather than to Failure, and no Error Message will be attributed to this (since Status Canceled has no error messages), leaving users to wonder why did their SSIS package get canceled.

Before we delve into what could cause an SSIS package to go to a Canceled Execution Result DataCode, there are a few logs you should check out as soon as you get this status which could help you identify the root cause:

As mentioned before, SSIS Canceled Execution Result Status could show up for many reasons, but mostly in relation to anything outside the execution context of a package, so there is no need to try and debug the package itself, you need to debug the environment in which the package is running, and so issues similar to the following could be causing this DataCode Execution Result:

These are just some ideas to get you started, as I mentioned this Canceled status could be anything outside the failure of SSIS execution steps, so dig deep and hard in one of the 10s of server logs and you’re bound to find something… start tugging on those strings

Update from Microsoft (20120807): According to Microsoft’s reply to the Connect ticket above, this issue will be resolved in SQL Server 2012 SP1, and the Cancelled SSIS status will hopefully become much more descriptive in terms of error reporting.