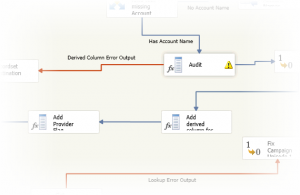 In this post I introduce the new features of Integration Services that are enabled through the new Project Deployment Model, as well as highlight some of the short-comings of this new technology, particularly with regard to Scale-Out and Distributed Processing.

SQL Server Integration Services has introduced a completely new deployment model for SSIS packages, which is now being called the Project Deployment Model as compared to the legacy Package Deployment Model.

The new deployment model takes advantage of the new SSIS Catalog Database, which is a new centralized repository for managing deployment projects, through the now dominant SQL Server Data Tools development environment, and with the SQL Server Database Engine itself. In order to start any SSIS Project Deployment Model, one needs to create a new SSIS Catalog DB within the Integration Services Catalogs folder in the DB Engine, as shown in the image below. 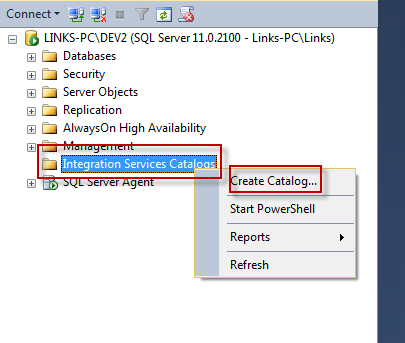 These features form the building blocks of many organizational and management features, which will much better elevate SSIS as a well controlled data processing and ETL environment.

There are some short-comings that still makes SSIS a less scale-able option in terms of being a fully fledged distributed data processing engine, and centralized management of this engine.

The Project Deployment Model closely couples SSIS with SQL Server Database Engine, this means that you cannot manage a remote SSIS instance on one machine, through the SSIS Catalog DB that exists on a SQL Server Database Engine instance on another machine, there are no options to link an IS Server with an SSIS Catalog DB, and any attempt to deploy an SSIS package through the new Project Deployment Model on a server that does not contain SSIS you will receive the following error message:

The path for ‘ISServerExec.exe’ cannot be found. The operation will now exit.

Both SQL Server Integration Service and SQL Server Database Engine Service are heavy weight services, and take up plenty of resources in terms of I/O, CPU and memory, having to install both services in order to utilize the features of the new Project Deployment model is an over-kill, and goes against effective resource compartmentalization.

With distributed processing engines such as Hadoop gaining quick popularity, SSIS needs to offer a flexible management approach, were servers running SSIS can be dedicated to purpose, while leaving the management to a centralized point (an SSIS Catalog DB). In order to be truly distributed, SSIS needs to move the code to where the data exists, not move the data to where the code exists.

SSIS Catalog DB needs to allow you to manage multiple SSIS instances across multiple servers, offering a centralized point for the management of ETL processes, while ensure effective distributed processing of data in a truly scaled-out scenario. We are so close, and the Project Deployment Model is a step in the right direction, but it is a virgin technology with alot to learn in terms of true scale-out to handle the exploding data bubble.

You can implement a distributed engine using the legacy Package Deployment Model of SSIS through commandline execution of these packages, and using PsExec to issue cross server trigger commands.

If you feel like pushing for SSIS to become a true scale-out distributed processing engine, then please vote for Decoupling IS Server and the New SSIS Catalog DB (Scale-Out) on Microsoft Connect.