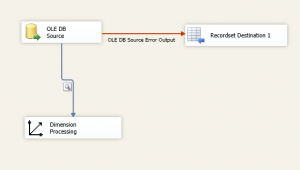 Without a doubt one of the most annoying and least useful errors I have ever encountered during my experience with SSIS.

This error has crept up on an SSIS packages that processes a dimension. The SSIS package is very simple and all it has is a OLE DB Source that dumps data from a query into a Dimension Processing task. The package executes fine until it reaches a particular row in the OLE DB source batch, in which it will fail with the following error message:

[SSIS.Pipeline] Error: SSIS Error Code DTS_E_PROCESSINPUTFAILED. The ProcessInput method on component “Dimension Processing” (2) failed with error code 0×80004005 while processing input “AnalysisServicesServerInput” (15). The identified component returned an error from the ProcessInput method. The error is specific to the component, but the error is fatal and will cause the Data Flow task to stop running. There may be error messages posted before this with more information about the failure.

[Dimension Processing [2]] Error: XML for Analysis parser: The commit or rollback request cannot be completed because there is no active transaction in this session.

To give you abit of a background on the issue, the dimension is a simple one, and has the following attributes:

I am trying to process the dimension in FULL mode, although the error is not specific to the processing mode (as I switched it to ADD or UPDATE with the same issue).

The hint to the solution is clearly in the first error message. What SSIS’ Dimension Processing Task actually does is package the data received from the OLE DB stream as an XML file before sending it off to be consumed by the cube database, this will be a batched stream obviously (otherwise the XML will be too large).

In order to zero-in on the issue, I reduced the dimension to simply an ID attribute (KeywordID), the dimension processed fine, so I deduced it was an issue in the NameColumn binding (which is bound to an NVARCHAR(125) string column). After some test I could prove that the issue stemmed from a particular keyword, but which one!, SSIS cannot tell what caused the error, as this is the error message received from the SSAS server, which has already rolled back the transaction and so all previously inserted data, so there is no way of detecting the incriminating keyword using standard error output handling mechanism techniques in SSSIS

For a script that removes all non-UTF-8 characters from a string refer to SO.

This has cost me dear hours, so I hope it saves you some!